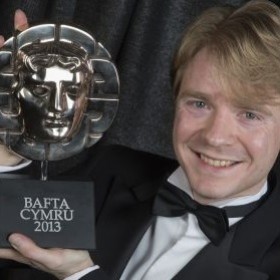 At this year’s glittering British Academy Cymru Awards Gorilla was delighted to see so many productions it has supported throughout the year being awarded – including Gorilla’s graphics arm – Bait Studio. As well as being key sponsors for this year’s event we were proud to be linked to 10 wins on the night for productions as varied as the Sky drama Stella to indie sci-fi film The Machine as well as a number of powerful documentaries for the BBC and S4C.

Bait Studio’s Managing Director, John Rennie, went up to the stage to accept the award for Cloth Cat Animation’s work on the children’s animation series Bla Bla Blewog. The company is part of Bait Studio and Gorilla group.

The evening was a huge success and it was great to see so many of our industry come together to celebrate the best of Welsh television and film.