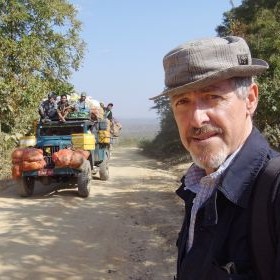 We are delighted that Griff Rhys Jones has been given a special award for the BBC documentary ‘Burma, my father and the Forgotten Army’.

The Ghana UK Based Achievement Awards (GUBA) has honoured Griff with the award for raising awareness of the Ghanaian veterans’ story. The documentary about Griff’s father, and his time as a medical doctor serving in the Gold Coast Regiment of the West African Frontier Force, was produced by Modern TV and edited by Gorilla. It was broadcast on BBC Two earlier this Summer.

Griff was given the award in a special presentation at the Greenwich Foundation for the Old Royal Navy College in the presence of The British High Commissioner to Ghana, his family and other guests.

“I am honoured to be given this award, but it is not for me. It really goes to the hundreds of thousands who served in Burma both black and white and to all the people involved in making this film. I just followed my father’s war record and uncovered some incredible stories. A friend wrote to me just the other day that she was “humbled” by the Ghanaian veterans. We all should be.”