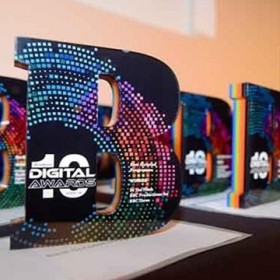 We were delighted to join the celebrations at this year’s Broadcast Digital Awards as Ludus, the new CBBC game show that we and Bait Studio worked on for Cube Interactive and Boom Kids, was crowned the winner of the Best Digital Children’s content award.

The interactive sci-fi show fought off stiff competition from the likes of CBBC favourites Wizards Vs Aliens and Dixi to take home the prize.

Ludus was CBBC’s first ever second-screen play along gameshow. A spin-off of S4C show Y Lifft, it features contestants battling to defeat a space villain to rescue their family and win a ticket home. The show comes with its own iOS and Android app to allow viewers to compete at the same time as the show’s contestants.

Gorilla was heavily involved in all stages of the show’s production process, providing the on-set and post-production facilities – our graphics arm Bait Studio also provided VFX and Motion Graphics.

Ludus was a ground-breaking project in terms of interactive TV production so we are so pleased to see it being awarded this well-deserved stamp of recognition from the industry – well done to all involved!