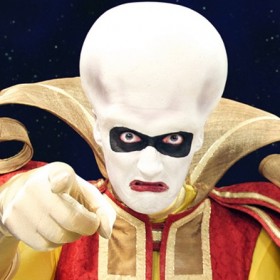 We were very pleased to see our work on new CBBC gameshow Ludus give a full-page spread in the latest issue of Broadcast TECH magazine – and our VFX arm Bait Studio got a mention too.  Check out the feature in full below:

CBBC launched its first second-screen playalong gameshow this month. The Boom Pictures and Cube Interactive 20 x 30-minute sci-fi series Ludus, a spin-off of S4C show Y Lifft (The Lift), features contestants battling to defeat a space villain to rescue their family and win a ticket home. The show comes with its own iOS and Android app to allow viewers to compete at the same time as the show’s contestants.

Cardiff facility Gorilla Group provided on-set and post-production facilities for the eight-camera studio shoot, which was recorded back to back in English and Welsh for S4C.

Gorilla technology director Rhodri James says this kind of production would typically have required a rack of expensive VTRs and a large supply of tape, followed by a lengthy digitisation process.

“Hard-disk recorders have become popular, but they are often limited in terms of codec choice, and the workflow still involved manually ingesting data from deck to central storage,” he says. “We were looking for a system that could fulfil two main criteria: it had to record multiple streams into a codec of choice; and it had to make sense financially.

Each system was able to carry out tasks such as file transcoding, image processing, online editing or grading. For security, Gorilla also copied the data onto USB 3.0 drives.

Recording into DNxHD made for an efficient workflow for the Avid post facility, with clip transfer from workstations onto the Isis or Object Matrix storage, and transcode-free editing. The chase editing functionality of Quadrus, which was supplied by Holdan, allowed editors to work on the show while content was being captured.

With the production recorded to an intermediate codec, fewer file had to be transcoded, and if Gorilla changes its workflow or editing platform, Quadrus can be configured to capture in XDCAM, AVC-Intra or ProRes.

The workflow provided a consistent codec, despite the mix of studio cameras, mini-cams and output from the game table. Standardising the workflow made it predictable for other facilities, including Gorilla subsidiary Bait Studio, which was responsible